Wasn’t it only yesterday that we were the kids, the rebels, the ones who said yes to our dreams and bye-bye to the naysayers? Then the kids (wasn’t that us?) had kids (our children), who then had kids (our grandchildren). Each generation used different names or titles.

Our first children called us Mom, Dad. Then, after we’d adopted children from other countries, I became Popi and they started to call Samahria, Mopi. (Mopi rhymed with Popi, it was easy to say, especially for the little ones in our family, and then our extended families across the globe picked up those names).

Jade (our granddaughter), during her Son-Rise Program®, referred to us as the Bopis because she couldn’t pronounce the P or M easily. One day, in the midst of a transition in the early days of our Son-Rise Program with Jade, she stared at me intently as I entered the room and then looked at Samahria very carefully as Samahria began to exit. Suddenly, she pointed at me, calling me “Big Bopi” and then pointed at Samahria and called her “Little Bopi.” Those titles stuck for years, and we loved them. When Jade emerged from her world of autism, she switched to calling us Popi and Mopi. We loved that, too. 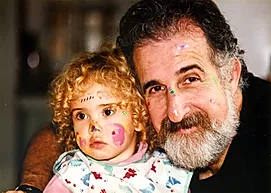 Then Raun, as an adult and a gifted teacher (once the very first Son-Rise Program child who recovered fully from autism), began to playfully suggest other names for us, some based on our grandchildren’s inability to pronounce our names. Thus, Samahria became Samsara, and I became Roldy and Apostrophe. (And, yes, there is a story behind each of those fanciful titles that Raun birthed into existence.) ​​

Bryn subsequently nicknamed me “little Barry Neil” to comically honor my past and the name on my books (Barry Neil Kaufman), which I found especially ironic as a philosopher/teacher/author who refers to the past as existing only in the present.​

Just recently, in the past few years, Bryn began to refer to Samahria and me as the “elders” of the tribe. (However, she still calls us Popi and Mopi, and also, when at the Option Institute, Bears and Samahria). My gosh, there are still folks who call me Barry! (Again, the name on the covers of my books.) Clearly, they don’t know me, or like one man said, they find the name Bears too intimate or even silly for a grown man. 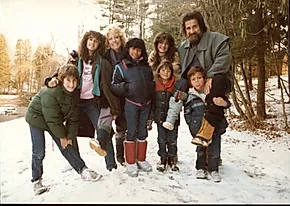 Today we are all of those – Bears and Samahria, Popi and Mopi, the big and little Bopis, Roldy and Samsara, little Barry Neil, and even “that guy with the hat” and “that woman with the scarf.”​​

Whoever you are and whatever words or names you and others use to refer to you, know that you are an original, a one-of-a-kind. Here’s to the kids in each of us, the little ones and the big ones we shelter inside! Here’s to the thoughts we have had and the ones yet still to be formed, to the actions taken and to the actions yet to be born!

Here’s to this moment, to the love we’ve shared and the love yet to experience!